View basket “CD Cherubim” has been added to your basket.

Alma’s melodies cannot be attached to specific points on a map; they traverse national limits and musical limitations. They even cross time, as in Matteo’s replaying of whispered conversations, overheard on an afternoon in London’s Regent’s Park at the turn of the last century. In this constant layering of worlds and gestures, the band never prescribes or proscribes, instead tendering the enthralling idea that “home” and the longed-for “somewhere else” can exist concurrently. Even if we’re rendered blind (or deaf) by our daily grind, our soul’s “imaginary sight”, as Shakespeare once called it, can still present shadows to our “sightless view” … and those images have no topography. “Tam Tam” is indicative of this free passage between worlds. During the Raunächte, spanning the Twelve Days of Christmas, numerous rips are said to appear in the fabric that divides our realm and that of the spirits. It is a time when the mythological Wild Hunt of phantasmal souls drives in mad pursuit across the sky, binding transnational folklore together, from Norse to German, from Canadian to Welsh, inspiring Schoenberg’s Gurrelieder and Swedish black metal band Watain in turn. Alma likewise connects with their kindred spirits, such as Federspiel from Krems an der Donau (heard on “Tam Tam” and “Bazzarah”), the Estonian friends with whom Julia and Marlene played in childhood or the wolves who are reincarnated, bone-by-bone, by the “Wolfsfrau”. 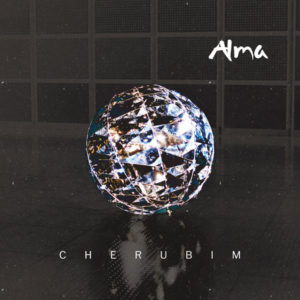