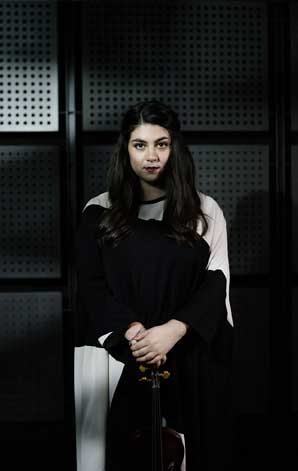 When I learnt to speak I also began to sing with my grandfather, who taught himself how to play the harmonica and would always accompany my singing.
Often we played not only as a Duet, but also in a Trio, as sometimes my mother played the guitar and sang with us.
So, in my younger years I was often in contact with old pop and folk songs.
The singing alone was no longer enough for me at the age of 6, I wanted to go to the School of Music and learn an instrument.
But I didn’t want to learn only one instrument, instead I insisted on learning three;
The flute, dulcimer and violin.
Just like today, it struck me at that time as being quite difficult to make a decision (and that maybe it depends on my zodiac sign?). Eventually I made the decision to choose the violin.

This led me into eight years of music education with Mrs Barbara Palfrader who founded the folk music group “Puschtra Vielsaitign”, in which I still play today.
In those eight years I learnt another two instruments; The flute and the piano.
After eight years of violin lessons at the music school, I decided to study violin and took private lessons with Mrs Irene Troi for a further five years.
During the period of studying at the music school and having private lessons, I was a multiple winner of national competitions and a member of several classical groups, in which I also often appeared as a soloist, in Italy/ South Tyrol and abroad.

I improved.
I specialised myself in this music direction with courses and seminars in Folk music in South Tyrol, and in Austria also, with Mr Otto Ehrenstrasser and Mr Peter Reitmeier.

With Mrs Verena Gamper, I prepared myself for the entrance examination to the University of Music and Performing Arts Vienna.
There I am currently studying classical violin with Mrs. Ulrike Danhofer and I have a focus on folk music research / ethnomusicology and elementary music education which I started in 2009.

After only six months in Vienna unexpectedly I was allowed to enter in the Formation „Aufstrich” as a substitute and this allowed me to make my first steps into the Viennese folk music scene.
In addition to “Alma” and “Puschtra Vielsaitign” I participate in other formations such as “Aasgeiger”.