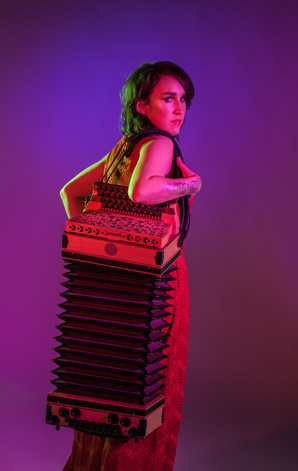 Juggling gigs, concerts, workshops, seminars and tours, Marie-Therese has been tirelessly playing ever since. In the young Viennese folk music scene, she has found some like-minded performers, namely the large circle of musicians answering to the name Aasgeiger, who play in different formations and help the lively Stammtisch culture flourish.

For a few years, Marie has been fiddling with all sorts of folding devices: diatonic accordions – like the Styrian accordion – but also chromatic ones – like the Viennese strumaccordion – or even with a mix of both, such as the Chemnitzer Konzertina, ancestor of the bandoneon. As the result, she can play diatonic, chromatic, Styrian and Viennese styles, with an emphasis on style.